What is disc golf? It’s fantastic!

What is disc golf?

Ever wondered what is disc golf? You might have seen those stranges looking iron baskets in the woods, what some might consider as animal feeding baskets. But actually it is one of the fastest growing sports of the 21st century!
Disc golf is a sports game very similar to traditional ball golf, at least in terms of rules and terms. The biggest difference is that disc golf uses flying discs instead of balls and golf clubs. In ball golf, the goal is to get the ball into a special hole, while in disc golf, the goal is to get the disc into a special basket with chains.

The first throw is made from a throw area called the teepad, then the next throw is from where the throw lands. Hole is finished as long as the disc is in the basket (or chains).

The main advantage of disc golf over ball golf is that it is usually completely free to play (unless the course is on private property), as subsequent costs are minimal and you can enjoy the game at any time of year and even during the night if the discs are equipped with LED lights. 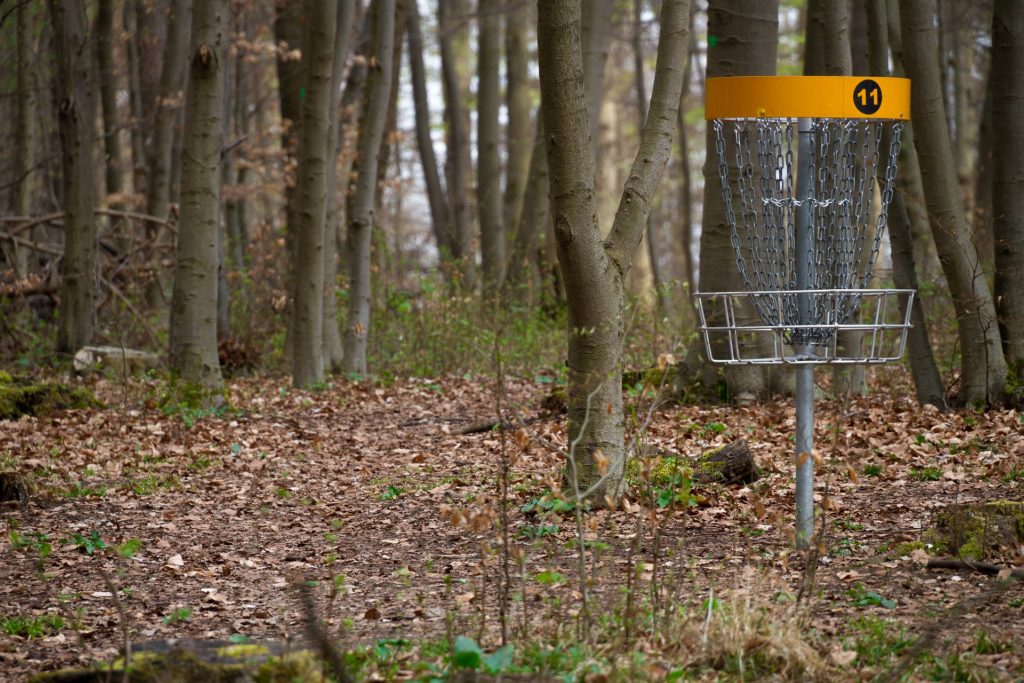 Disc golf is the perfect way to move and entertain yourself at the same time. Disc golf is a sport that requires little physical activity, but still has a healthy effect on your body and after a long day on the course, it feels like you have moved. Disc golf offers a great deal of emotion, both positive and negative, depending on the situation. There are also many different game situations that require different throwing techniques and a game plan so that the next throw is the best possible and whether to risk a throw or not. Such situations make the game very interesting and attractive, bringing both jubilation and frustration.

You don’t need any special clothing or footwear to play disc golf, everyone chooses them at their own discretion and comfort. The equipment is also affordable compared to many other sports. Discs used by amateurs and world tops are in the same price range, ranging from 10-20 euros and one disc is enough to get started.
Now you know the theory about what is disc golf, but the best way to get to know the sport more is to get out to the course and try out yourself this exiting game.

It is impossible to say who was the first to play disc golf. The beginnings of disc golf are closely related to regular frisbee, and it is believed that the first players of elementary disc golf originated as early as the 1920s, when pie forms and can lids were used as frisbee.

The history of modern disc golf dates back to the late 1960s, when two men named George Sappenfield and Ed Headrick (lived 1924-2002) introduced the term “disc golf” in the US and introduced the game to the general public.

In 1965, George Sappenfield was a leisure instructor at Monterey, California, during his summer vacation. One afternoon playing regular ball golf, he wondered if it would be fun for kids to play golf using flying saucers. When he graduated from university in 1968, he became a park and recreation instructor in Thousand Oaks, California. The game quickly became popular, especially on campus.

Now known as the “father” of modern disc golf, Ed Headrick invented and patented the first Mach-1, known in English as “Disc Pole Hole” and officially completed in 1975. Ed has said he was one of the inspirations for creating a basket was the fact that he and his friends were constantly arguing about whether or not the disc hit a certain target (a pole, a hula ring, or a fire hydrant), so he created a target to see clearly if the disc hit the basket.

“Steady” Ed Headrick is also a man who began to think more seriously about developing discs for disc golf while working at Wham-O, which originally made toys for children. Ed started supplementing the Wham-O frisbee called Pluto Platter (came out in 1957). He changed the height / thickness of the rim, the shape, diameter, weight and plastic type of the disc, creating a disc that could be thrown quite accurately, it went on sale in 1966. He started selling frisbee and officially registered the frisbee as a sport. Later, various frisbee sports such as distance driving, freestyle etc. were added. The first disc specifically designed for disc golf was produced by Innova in 1983 and is called the Eagle, which is still in production today. All of the frisbees that were produced before that were so-called throw & catch frisbees, with a rather deep edge and slow flight.

Watching disc golf videos is a good way to get to know the sport more. But of course playing youself is the best way to understand what is disc golf!

On Season’s Eve, A Look At Last Year In Las Vegas